From the list of possible genetic mechanisms listed here and theoretically implicated in preterm birth determinism and in the duration of pregnancy, clearly emerges the difficulty of being able to explore them all and to evaluate, for each of these, the realistic role of their responsibility in preterm birth. It is in fact possible that even though they are physiopathologically the basis of the mechanisms  and their alterations, later, in practice such errors do not occur or occur so rarely in their whole that, analyzing them, would not lead to any clinical result. In fact, it is probable that the pathogenetic plant insists mainly on few, but better defined, genetic mutations and that only the large case studies can bring out as responsible among all those listed above.

Therefore, it has been tried, by major scientific studies, to carry out important epidemiological studies to verify, on the population, which, in reality, are the mutations that then concretely are responsible for the clinical events of interest.

So we started to study, in the field, the genetic modifications actually found through sophisticated mathematical models that brought out the whole genome of sensitive populations, the most evidently responsible alterations. To this end, many recent studies have verified what were the SNPs associated with length of gestation or preterm birth with full genome association SNP (Genome-wide) previously reported in the Gwas catalogue (17) and using the GTEx database (18) to search associations with specific gene expression. Previous studies have examined whether various independent variants in a given place influenced the timing of birth by a multiple conditional and joint multi-SNP (Cojo) analysis (19). The fraction of the phenotypic variance in the replication data sets from all common SNPs (20) from GCTA (21) or SNP sets associated with different significance thresholds in the detection cohort using a genetic approach (22) was then estimated.

Analysis of the various polymorphisms in the literature

The broader and more interesting studies (23) have identified a number of SNPs with potentially functional impacts are understood by the loci identified as potentially important for the duration of pregnancy and preterm birth.

Following is a series of clinical variables that condition the risk of preterm birth.

The following variables add, complete and modify the spontaneous risk of preterm birth which is expressed by the genetic study.

The following table is a useful instrument  in the hands of the treating obstetrician-gynecologist in order to assess in its entirety the specific risk of the subject. 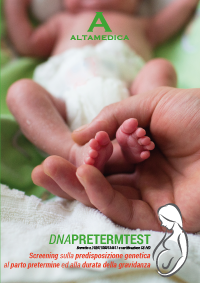